Rebecca found a non governmental organization called Daughters of Cambodia while doing research for her trip to that country. The goal of this organization is to get young women/children out of the sex trade. Sex trafficking is a massive problem in Cambodia, where girls as young as five are sold by their families into brothels. The only way to get them out is to give them an alternate source of income, as most owe a "debt" to the brothel owners for money lent to their families and also feel an obligation to send money back home.

Rebecca met with Ruth Elliot, the founder of the organization, during her trip to see the facility and meet some of the girls. Rebecca and Ruth had been corresponding for awhile via e-mail. Together, they had come up with a small-business plan to teach the girls sewing skills in order to create a product line using the abundant local silks, which Rebecca would then sell through her website for their benefit. Rebecca had funded the purchase of sewing machines, supplies and an air-conditioner to get them started. By the time she arrived in Cambodia the sewing center was up and running. Ruth and her crew had already taught the girls to use the machines and had make some samples based on Rebecca's e-mails.

Rebecca and Ruth had never really met and neither knew what to expect from the other, but they immediately hit it off and recognized each other as two people with a common goal. They and the girls sat on the floor in a large group to review the work, which was almost perfect. The girls sat and stared with intense interest as Rebecca commented and made a few slight changes. Their excitement at her approval, (and their fascination at her white skin), could not be contained. It was hard at times to imagine these smiling girls in their former lives and Rebecca and Dade hoped that, with time, they could help many others to follow in their path. 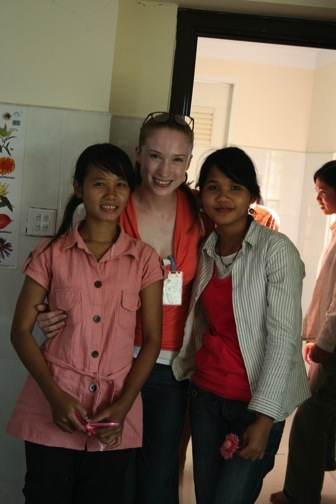 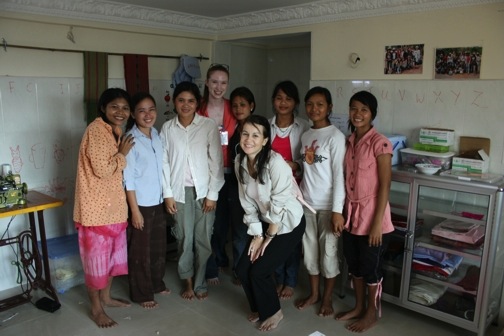 Your donations at work...

We sent Daughters a $3,000 check in December, 2012 and received a report detailing how they used our contribution. We funded three months' salary for:All of these positions are filled by the young women Daughters serves, providing them with an immediate means of support that allows them to leave their former lives as well as training that will enable them to support themselves in the outside world.

We continue to support Daughters of Cambodia through a designated Google One Today project.
​Last year we raised and sent $1550.00.
Want to contribute?